Prof Magoha said contrary to assertions by some people, schools that meet the requisite requirements are being registered upon, thorough inspection by quality assurance officers and other relevant authorities.

“Leaders should stop the tendency of establishing new schools in a haphazard manner and expect the government to post teachers to such institutions, some which does not meet the required standards. What we are saying is that all schools which are ready for registration and managers have submitted registration applications should be registered,” he stressed.

Speaking, Monday, when he officiated groundbreaking ceremony for the renovation of Salabani Primary School funded by Child Fund Kenya at a cost of Sh 30 million in Marigat Sub County, the CS insisted that starting schools within a short distance is what is being discouraged.

The Cabinet Secretary was responding to a local member of County Assembly, Francis Kibai, who had requested the CS to waive registration requirement for more schools to be established in the region.

In the function attended by among others Labour CS Simon Chelugui and Governor Stanley Kiptis, the CS thanked Child Fund for sponsoring the reconstruction of the school at the new site after the original institution was submerged by rising water levels of Lake Baringo.

Child Fund Africa Regional Director Chege Ngugi said that the construction work is expected to be complete by February or March in readiness for occupation in May next year.

Mr Ngugi said that Child Fund was committed to helping children throughout the world especially those living in the poorest places improve their lives through education.

Area legislator, Charles Kamuren, while commending the organization for funding reconstruction of the school regretted that some other learning institutions in the region have been lost after being submerged in water occasioned by rising water levels in Lake Baringo, citing Lake Baringo girls which is currently deep inside the water.

He also expressed concern that enrollment in parts of the constituency have drastically gone down due to rampant attacks from bandits and cattle rustlers who raid the region at will.

Governor Kiptis in his address called for the establishment of more boarding facilities, especially in Tiaty, parts of Baringo North and Baringo South to boost retention of children and completion rate, citing Tiaty Constituency where only 10 per cent of those who join class one at any given time successfully sit standard eight exams.

Prof Magoha early in the morning led a multi sectoral door to door campaign to mop-up children who have not joined Form One where four were rescued at Kaprogonya and Kapkut Estates in the outskirts of Kabarnet town and enrolled at Kituro Secondary School in Baringo Central.

The CS accompanied by his Labour and Social Protection counterpart, Simon Chelugui, and Chief Administrative Secretary (CAS), Patrick ole Ntutu, noted with concern the low transition rate registered by the County which stand at 80 per cent.

He took to task education officials in the County for sleeping on the job and gave them ultimatum up to Friday to ensure the remaining 20 per cent of the children were sought and taken to school.

“We would like to see all children reporting to school in this County, latest by Friday and if they are not in school why are they missing out,” he said.

Prof Magoha, said he does not understand why Rift Valley region has only managed 84 per cent transition rate, situation he blamed on lack of supervision by education officials. 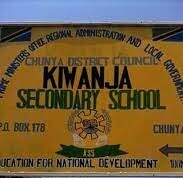 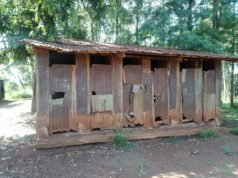