A nomination paper submitted by an Independent Candidates to the Commission shall; 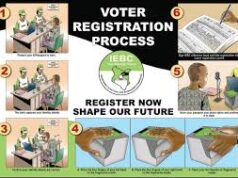