Bunyore Girls High School is a national school located in Vihiga County. This article provides complete information about this school. Get to know the school’s physical location, directions, contacts, history, Form one selection criteria and analysis of its performance in the Kenya Certificate of Secondary Education, KCSE, exams. Get to see a beautiful collation of images from the school’s scenery; including structures, signage, students, teachers and many more.

Bunyore Girls High School is a national school located in Emuhaya, Vihiga County; Western Region of Kenya. It is a girls’ only boarding school.

Below is Bunyore Girls High School’s history as provide by the school;

‘Bunyore Girls High School in Emuhaya, Vihiga County was established by the Cramers Missionaries from South Africa as a commercial training centre in 1905.

The Cramers Missionaries from South Africa visualized Kima Mission (founded in 1905) as a commercial training center for girls who would be taught to live together as Christians and then go to nearby villages to teach Sunday School (Isanda). In 1930, the Ludwigs (American) set up Kima Girls School under the Church of God management. There were 12 students and 3 teachers.

The headmistress was Mrs. Ludwig. Only two classes operated – standard 1 and 2 and subjects taught were Religious Instructions, Arithmetic, Vernacular, Needlework, English, etc. Mrs. Ludwig stressed needlework and the school excelled in this in the whole country. Because of this together with good Christian based discipline, Kima Girls became highly valued for wives throughout Kenya.

In 1936, the school had grown up to class 5, and there were 30 girls. Cookery and Kiswahili were added to the curriculum. A boys’ school was operating adjacently. In 1944, the school was a fully-fledged primary and intermediate school with classes up to standard 8, each with about 25 girls. Some teachers were shared with the boys’ school close by.

The first K.A.P.E. (Kenya African Preliminary Examination) was done at Kaimosi, for lack of facilities. In 1945, this was rectified. In 1946, the boys’ school was shifted to Ingotse for lack of room. Mrs. LaFont became headmistress.

In 1951, Mrs. Browlier and Miss Schneider relieved Mrs. LaFont who was on leave. In 1952, Mrs. LaFont moved standard 1-4 to the present Kima Primary School, while Bunyore Girls’ High School remained the intermediate classes 5-8.

Because it was an outstanding school, conditions for entry were tougher and in addition to the C.E.E. (Common Entrance Examination), a special interview was necessary. Consequently, passes at Kenya African Preliminary Examination (K.A.P.E.) were high and numerous. At this time the school had an enrollment of 35 pupils per class. The school continued to enjoy the reputation of best Domestic Science results and best behaved and qualified girls.

In 1964, the first Form 1 class arrived and the last standard 5 selection was done. In total there were 105 primary school girls and 25 in Form 1. This last primary class left three years later as Certificate of Primary Education (C.P.E.) was now in standard 7. In 1967, the school attained a full Four-year course with single streams and the first Cambridge Local Examinations (C.L.E.) was done with 20 entries. Rev. Rebecca Litunya was the head girl in that year. The school results in K.P.E. were quite good having 100% passes in the years of 1950, 1953, 1955, 1956 and 1964.

The school had a pass of 90.5% in that examination. In 1968, the Church of God management handed over Bunyore Girls’ School to the Ministry of Education. Miss. Bannister replaced Mrs. LaFont as headmistress. The school had a total of 180 students i.e. Form1 – 74, Form2 – 37, Form3 – 36 and Form4 – 33. In 1969 a second stream was introduced. Mrs. Hellen Omoka became the first African headmistress. There were about 40 students per class.

In 1970, Miss. Rose Oduol replaced Mrs. Omoka. So she too gave way to Miss. Patriciah Ododa in 1971. In 1972, Miss. Ododa handed over to Miss. Jessica Ngoya. Total enrollment was 410 students. A Harambee stream was introduced where students would sit for the Kenya Junior Secondary Examination (K.J.S.E.) at Form 2. In 1974, Mrs. Priscilla Were took over from Miss. Ngoya.

There were 12 classes (4 moderns) with about 514 students with 16 teachers. There were 2 laboratories shaped to fit 200 students, a dining hall, a bookstore, a small prayer room, 9 teachers’ houses, 4 subordinate staff houses, 7 dormitories (3 new, 4 small and old), a school store, 2 shower blocks, one sanitary block and an old office block.

All these were crowded at 2.5 acreages. In 1976 with the untiring efforts of Mrs. Were, teachers, the board and Harambee support, this was expanded to 6 acres. Gigantic work to fill the valley and level the ground next to Wekhomo Market immediately started, with close co-operation from the Ministry of Works. In 1977, the Ministry of Education granted funds for a new, bigger sanitary block that was built.

These results were second only to Mukumu Girls’ High School in the province. Suddenly Bunyore Girls’ High School became the envy of everybody around us. The Ministry of Education could not help but grant the first Form V Arts class in June 1978 after a long struggle by the headmistress and the community.

In 1988, there was no secondary school examination in the country due to a change in the education system. That is why in 1989, two sets of examinations were done; the last ‘A’ Level examination and the first K.C.S.E. (8-4-4) examination.

The school excelled also in sports and continued to feature prominently in Music and Netball. In 1978 the school made an impact at the National level in Music, Elocution, Traditional Dancing, and sports. Students’ discipline was quite high.

At that time the staff comprised of 24 teachers, headed by Mrs. Were and assisted by Mrs. Ruth Otemba (who joined Precious Blood GHS in Nairobi in 1985). Later, the Chapel became the library (now Junior Library). The bookstore became a classroom and the books were being stored in part of the kitchen store.

Members of staff still had to seek accommodation outside the school compound. Dormitories were inadequate. Clearly, there was room for expansion. The first ‘A’ Level examination was done in 1979. In 1982, the school got the second ‘A’ Level stream offering Sciences.

In 1985 the Government of Kenya changed the Education System from the previous 7-4-2-3 to the current 8-4-4 system. Because of this, the first Form 1 of the 8-4-4 system of Education was admitted in 1986 as the ‘A’ Level students were being phased out.

This went on up to 1989 when the last ‘A’ level Examinations and the first K.C.S.E. (Kenya Certificate of Secondary Education) examinations were done. Mrs. Priscilla Were will go down in history as the longest-serving Principal of Bunyore Girls’ High School for 17 years from 1974 to 1991.

She rose through the ranks to become head of the department.  She left briefly to go and head Kilingili Secondary School from 1991 to 1996. On returning, the former Principal found Bunyore Girls on the downward trend. To quote her, she always said, “I took the school by the horns,” streamlining all areas especially student and staff discipline and general outlook until the school regained its lost glory.

The former Principal changed the face of this school through a co-operative Board of Governors, chaired by Mr. Samson Munika; and the Parents Teachers Association. Three monumental structures sprang up in record time. The Administration Block – housing all the main offices, classes and library was completed and inaugurated by the former President H.E. Daniel Toroitich Arap Moi in 2001.

A Dormitory Complex with a capacity to host 500 girls followed suit and was also completed and dedicated by the former Vice President H.E. Moody A.A. Awori in 2004. The last in her cap of achievements was the construction of the Science Complex which was inaugurated in 2006 by the then Education Secretary, Prof. George I. Godia.

In terms of transport, for a long time, the school had an Isuzu truck (now nicknamed kukhu-meaning grandmother). In 2006, the school acquired a new 51-seater Isuzu Bus and a 14-seater van. In terms of academic standards, the school’s mean score improved steadily from 6.607 (C+) in 1996 to 9.101 (B) in 2006 being the best (at that time) since the establishment of the 8-4-4 system of education.

In addition, the school was made a KNEC marking center and SMASSE center both coveted assignments for any school in Kenya today.

In the 2007 K.C.S.E., Bunyore Girls’ High School produced the second-best overall female student in the country, Mary Mukusa. In the same year, the school attained a five streams status. In January 2008, upon her retirement, Mrs. Esther Muhanji handed over the school to Mrs. Rose Wayeta Waswa Shitsama.

Before she became the Principal of Bunyore Girls’ High School, Miss. Waswa had been a teacher in this school. The current Principal was first posted to Bunyore Girls’ in 1988 to teach Biology and Geography. Due to her dedication and commitment to work, she rose through the ranks to become a Dean of Studies and later the Deputy Principal.

Because of her exemplary leadership skills, Miss. Waswa was promoted to go and head Friends School Igunga Girls and later Moi Girls’ Vokoli both in Vihiga County. When Mrs. Muhanji retired in 2007, she was the only suitable replacement as the Principal of Bunyore Girls’ High School from 2008.

Mrs. Shitsama is a God-fearing, humble, soft-spoken but the firm lady in her administration. She has steered the school and we have all seen its steadfast growth. In terms of enrollment, the school has grown to a six streamed school since 2011 with an average of 55 students per stream.

In January 2012, we admitted the first National School students who sat their K.C.S.E. examinations in 2015. Our target for 2015 K.C.S.E. is 10.5 (A-). In terms of infrastructure, Mrs. Shitsama’s first mega project was the construction of the modern Ruthfisher Dormitory Complex which was dedicated to God in 2011 by The Rt. Rev. Dr. Byrum A. Makokha (Arch-Bishop of the Church of God in East Africa – Kenya, the sponsor) and was inaugurated by The Rt. Hon. Prime Minister, Dr. Raila Amollo Odinga the same year.

This was followed by a modern storied staff houses unit (with 12 units) which was dedicated in 2013 by Rt. Rev. Dr. Byrum A. Makokha. She is currently working on an ultra-modern Dining Hall complex which was a G.o.K Project when the school was elevated to national status in 2012.

The school has a French Regional Resource Centre since 2010 and a G.o.K ICT Project center since 2011, among others. Above all, we have a beautiful compound.  In a nutshell, Bunyore Girls’ High School is the academic hub of Western Province (now Nzoia Region).

In 2013, the school bought a brand new photo-printing machine and computers. The school acquired a new, more powerful generator in 2014. In terms of transport, under Mrs. Shitsama’s tenure, the school has purchased a new modern bus; the MAN (Machine Ainsberg Nosberg), a 67-seater bus which arrived on the school compound on 6th November 2015.

Thanks to the efforts of the parents in acquiring the new school bus. At present (in 2015) there are 46 TSC Teachers, 15 BOM Teachers, 15 non-teaching staff, 25 subordinate staff, and 1203 students. Bunyore Girls’ High School community is, therefore, a community of 1304 people.’

The school’s Motto is; ‘United We Excel.’

In need of more information about the school? Worry not. Use any of the contacts below for inquiries and/ or clarifications:

Being a public school, form one admissions are done by the Ministry of Education. Vacancies are available on competitive basis. Those seeking admissions can though directly contact the school or pay a visit for further guidelines.

The school has maintained a good run in performance at the Kenya National Examinations Council, KNEC, exams. In the 2018 Kenya Certificate of Secondary Education, KCSE, exams the school registered a total of 266 candidates who managed to score a mean of a B+(plus) with a performance index of 66.894. In 2019, the school had a total candidature of 363 students.

Planning to pay the school a visit? Below are some of the lovely scenes you will experience. 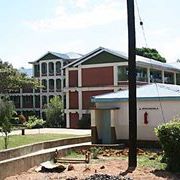 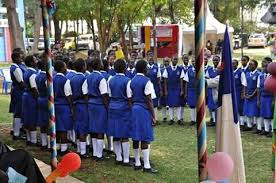 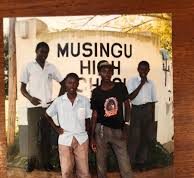 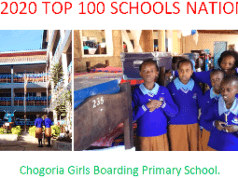 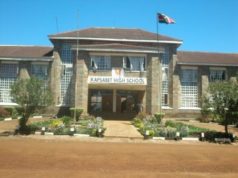