Prof Magoha argued that unlike the previous 8-4-4 system of education that was examination-oriented, CBC has created an environment where none of the learners is disadvantaged.

“The CBC takes care of the ability of every learner so that they are handled accordingly as well as identifies and nurtures talents,” he observed while inspecting a CBC classroom project at Ingidi Friends’ Secondary school in Vihiga Sub County on Wednesday.

The CS stated that 72 per cent of the 10,000 classrooms to be constructed nationally have been completed while the rest are in the final stages.

He assured the public that there would be no chance for financial impropriety as his officers would visit all the schools where the classrooms are being constructed to inspect and ascertain the works.

The former university don expressed optimism that the projects would be completed before the Kenya Certificate of Primary Education (KCPE) kicks-off on the 7th of March this year. 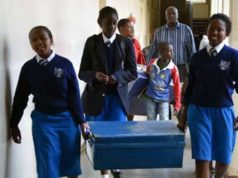